After six years of war, children in Yemen are growing up in the world’s worst humanitarian crisis. The war is driving the country to the brink of famine.

It’s estimated that 20.7 million people — or a staggering 66% of the population — now require some form of humanitarian or protection assistance, including 11.3 million children.

Save the Children leads the world in protecting children from the physical and emotional wounds of war. Join us to help ensure every child has a place to call home, a childhood and a future.

Join as
an Individual

I want to create one fundraising page. All donations will go to this page.

I want to be a team captain to build a team that will fundraise together. Every team member will get a fundraising page - all totals roll into the team page total.

I want to create my own fundraising page under an existing team - my total raised will roll into the team page total.

Our teams work around the clock to ensure that children’s rights are protected. Since 2015, we have treated more than 322,000 children under 5 for malnutrition, have provided over 1.9 children and families with food baskets or cash transfers, helped over 147,000 children through our education programs and supported over 85 health facilities. 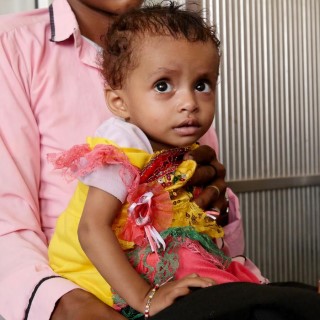 
Dancing to Heal the World

Ongoing conflict in Ethiopia’s Tigray region has displaced more than 1.7 million people. Beile and her children: Senai, Abiah and Danait decided they needed to help. The children performed their own dancing and singing routines to collect donations and raised $650. "The sweetest thing they did," smiles Beile, "is that they had piggy banks with some coins, and they emptied them into the fundraising jar before they started asking for donations from others."

Rico is a rising high school senior and an experienced beekeeper who put his honeybees to work. Inspired by Save the Children's work in Ukraine, Europe's largest honey producing country, Rico raised more than $5,000 by giving each donor a jar of his summer honey harvest. 100% of the donations went directly to Save the Children's Emergency Relief Fund.

"If even the humble honeybee can help Save the Children, then surely each of us can too," says Rico.

COVID-19 had many repercussions for U.S. families, including, for some, their first experience with hunger. Mark Roberts decided to take action. Mark went on an 8-week journey across Massachusetts in his electric wheelchair with his dog and wife. They rolled to raise awareness and more than $100,000! "I have to say that I had so much fun, learned so much about so many people from across the political and economic spectrum. My Roll/Stroll restored a bit of my faith in humanity," says Mark.

Tessa, from Connecticut, raised $2,000 for Save the Children's Ukraine Relief effort and is proud to help the children there as they try to stay safe during the war. Tessa says, "Helping others is a gift, not only to them, but to yourself, knowing that you are doing good for the world." Tessa wanted to send a message that people should be grateful for what they have and do what they can to help others. Tessa used her passion for baking to support children in Ukraine by baking scratch-made apple tortes.

Students at Magellan Middle School started "Hike4ACause" to raise money to help Afghan refugee children. Students were asked to get a sponsor to pay them for each mile hiked. 70 students hiked 538 miles raising $6,387.96!

"We are very grateful for the opportunity our community had to make a meaningful contribution to the lives of young refugees," said Nicolas Puga.